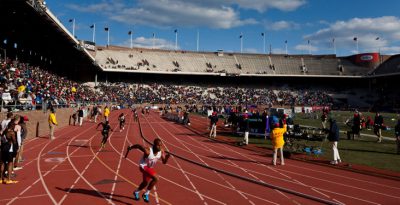 It’s almost time for the Penn Relays (also known as Penn Relays Carnival). Founded in 1895, the Relays are not only one of the oldest and largest track and field competitions in the United States, but one of the most iconic events hosted in Philadelphia each year. Visit the Penn Relays while staying with us at The Rittenhouse, and get your fill of thrills along with thousands of fans and athletes at Franklin Field.

With an astonishing 300 events held over five days, the Penn Relays draw over 15,000 participants and 100,000 visitors from across the world. Everyone from high schoolers to college athletes to track club members has a shot at glory. In 2016, the Relays run from April 28-30, preliminaries run on the Tuesday during Carnival Week and the Finals run on Friday. Attendees have the opportunity to see the men’s and women’s 100-meter, the 4×100-meter relay, 5000 meter, and hurdles and more. Field events include discus, pole vault, javelin, shot put and the long jump. The full 2016 Penn Relays schedule is available online.

One of the most exciting attractions of the Penn Relays, of course, is the series of relay races between USA and the World. Held on Saturday, these races have in the past produced such spectacles as Usain Bolt pitted against American runners. You’ll also have the chance to learn about astounding moments in Relays history, including Larry James’ epic 440-meter relay leg in 1968, allowing him to continue to the Olympics. The Penn Relays also played host to Michael Johnson’s finale on American soil, during his 2001 “Golden Victory Lap Tour.” Visit this year, and you may have the chance to see records shattered and legends born in real time!

The Penn Relays take place at Franklin Field, located on 33rd Street between Walnut and South Streets in University City. Located just a few minutes west of our hotel in Center City, we recommend getting there via SEPTA bus, trolley and rail. Ticket prices on Thursday and Friday range from $18 to $24, depending on where you sit, while on Saturday, tickets range between $40 and $70. Be sure to reserve your tickets and book your hotel room as soon as possible for this signature Philly event – one of the most famous track and field competitions in the world.