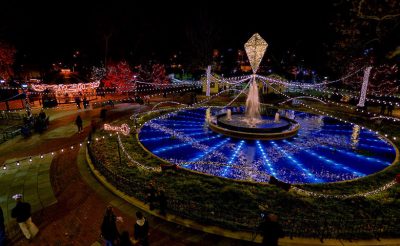 Following a full Thanksgiving feast, Philadelphia has a plethora of activities for your family. Watch the country’s oldest Thanksgiving Day Parade. See Christmas trees come alight across the city. Visit a garden filled with elegant lights. However you want to spend time with family and friends, a stay at The Rittenhouse places you near these Thanksgiving activities in Philadelphia.

Come partake in the oldest Thanksgiving Day Parade in the country. Now in its 97th Year, The Philadelphia Thanksgiving Day Parade features classic floats, massive character balloons, and special guests. Balloons this year include Tweety Bird, Olivia the Pig, the Tasmanian Devil, The Cat in the Hat, a T-Rex, Curious George, The Grinch, and Mr. Potato Head. Guests this year feature Mickey, Minnie, and the Toy Story cast from Disney on Ice. In addition, the cast from the Kimmel Center’s upcoming productions of Mamma Mia!, The King and I, and Dirty Dancing will be present, along with the Wizard of Oz cast from the Walnut Street Theatre.

Various locations and times around the city

This year, the holiday season in Philadelphia becomes extra cheerful with the Philly Holiday Festival, a seven week celebration. As enticing to visitors as it is to locals, the festival features America’s Garden Capital Maze in Dilworth Park, light shows, parades, and fireworks over the Delaware River. The Franklin Square Holiday Festival is a spectacular light show, with a giant lighted kite to honor Ben Franklin and 50,000 lights with holiday music. The Made in Philadelphia Holiday market sells handcrafted goods from locals. Events run from November until January, across Philadelphia.

There are many tree lighting ceremonies happening around the city during Thanksgiving Week. The Philadelphia Museum of Art hosts a ceremony for the tree in their courtyard on Wednesday, November 23rd, at 4pm.  Afterward, you can enter the museum for pay-what-you-wish admission. On Friday, November 26th, The Philly Holiday Tree at City Hall comes aglow. The city’s 38-foot tree is set atop a multimedia base accented by iconic Philly symbols, like Rocky, the Liberty Bell, and Independence Hall. Nearby, in Rittenhouse Square, one of the largest trees in the city is lit on Tuesday, November 29th at 5pm. The tree is typically over 30 feet tall, and Rittenhouse Square is adorned with 5,000 colorful globes.

Penn’s Landing becomes a winterized riverfront park during the holiday season. The RiverRink, an Olympic-size skating rink overlooking the Delaware River, is complemented by a ski chalet-style lodge and a winter garden with a majestic tree, with over one hundred thousand LED lights. Fire pits, warming cabins, and a kid’s lodge with arcade games keep you warm, cozy, and full of excellent food—this year’s selections include Chickie’s and Pete’s, alongside Garces Group. Munch on Crabfries with cheese sauce, or have a steaming bowl of tomato soup. For over 20 years, the RiverRink has been a holiday tradition, offering public skating sessions, rentals, sharpening, and other special events all season long.

Just outside of the city, Longwood Gardens has over a thousand acres of gardens, woodlands, and meadows. During the Thanksgiving season, the gardens are decorated with half a million twinkling lights, colorful fountains, and beautifully adorned trees. The most elegant is an 18-foot Fraser Fir decorated with a garland of musical instruments. In addition to the natural beauty, the gardens also present world-class jazz, classical, organ, and dance in the beauty of their gardens. Strolling carolers and organ sing-alongs will add to the festive cheer. If you feel chilly, you can cozy up to their evening fire pits, placed in Peirce-du Pont House Plaza, Dogwood Plaza, and The Hour Glass Lake Pavilion.

Philadelphia is at its most festive during the Thanksgiving season. Whether you’re visiting or hosting family, there’s a plethora of holiday attractions in Philly waiting to be experienced. Stay at The Rittenhouse, and be in the center of the celebrations. Our hotel’s central location in Rittenhouse Square puts you and your family amidst these quintessential Philadelphia Thanksgiving attractions.

Posted on November 22, 2016 by Rittenhouse Hotel