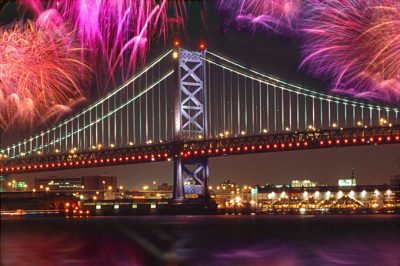 It won’t be long before winter’s on its way out, but that won’t stop the season’s enthusiasts from indulging in all Philly has to offer. That opens up a world of possibilities for you during your winter stay at our Philadelphia Center City hotel, nestled among some essential Philadelphia winter attractions. Even with the holidays gone by, there are still plenty of ways to stay cozy and enjoy the charm of winter. You don’t need to look far to find art, dining, music, and entertainment in Philly that’s just what the weather demands.

New Year’s Eve is the perfect place to begin looking for unforgettable experiences in Philly. Home to not one but two thrilling fireworks shows to ring in 2017, the sweeping vista of Penn’s Landing is home to SugarHouse Casino’s New Year’s Eve Fireworks on the Delaware River Waterfront. Held at 6pm and midnight, you’ll get cozy with the crowds, but if you arrive early enough, finding the ideal spot to take in the dazzling displays should be easy.

A February favorite, the Philadelphia Auto Show is essential for anyone who loves cars and technology, or even anyone who’s simply in it for the spectacle. From January 28-February 5, 2017, the Pennsylvania Convention Center is home to more than 700 concept, classic, luxury and exotic cars, giving guests the chance to see cutting-edge vehicles before they’ve arrived in dealerships. The event kicks off with the Black Tie Tailgate on January 27, an evening for guests to don their best, dine on fare from renowned restaurants, and donate to a good cause (The Division of Neurology at The Children’s Hospital of Pennsylvania).

Now through April 9, 2017 the Pennsylvania Academy of the Fine Arts is hosting an exhibition of extraordinary significance for those who want to reflect on world events. Coinciding with the 100 year anniversary of America’s involvement with the war, World War I and American Art is the first major exhibition dedicated to the reactions of American artists to the First World War. Not only will you get to experience never-before-seen history, you’ll be able to see all of the other outstanding artworks on display throughout PAFA’s galleries.

If all you want is a place to escape the cold, Philly’s eateries offer up quite a few perfect hideaways. Restaurants and bars with fireplaces in Philadelphia are astonishingly easy to come by, from the eclectic English pub The Dandelion at 124 S. 18th Street to the ever-crowded McGillin’s Old Ale House at 1310 Drury Street to the roaring backyard fire pits of Frankford Hall in Northern Liberties. All offer picturesque places to snuggle up, and menus full of decadent fare as well. Settle in, pick an enticing cocktail or craft brew, and get the feeling back in your fingers and toes surrounded by good company.

Winter in Philadelphia can find you taking in the city’s culture, indulging in some seasonal cuisine, or celebrating the new year with fellow revelers. Choose from a variety of activities while staying at our Rittenhouse Square luxury hotel, and make one-of-a-kind memories for this special season.

Posted on December 26, 2016 by Rittenhouse Hotel