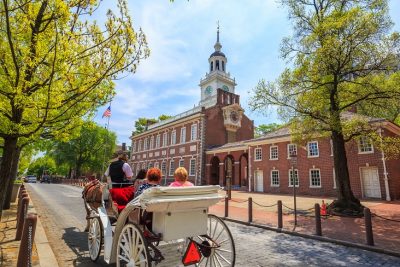 Politics and Pride at the Rittenhouse During the Democratic National Convention

Be witness to history during your stay at The Rittenhouse Hotel. The Democratic National Convention 2016 is coming to Philadelphia, and the location of our hotel in bustling Center City will be a focal point for travelers in attendance. The convention itself, held at the Wells Fargo Center and the Pennsylvania Convention Center July 25–28, 2016, are both within easy reach of our Philadelphia accommodations, making it easy to get to all the events associated with the convention.

Held one week after the 2016 Republican Convention, this is the first party convention held in Philadelphia since the 2000 election cycle. The city’s rich entwinement with American history, of course, goes back farther than that; as the country’s birthplace, this is where the Founding Fathers set the United States on the path to nationhood. The Rittenhouse Hotel is only a short distance from Independence Hall and Independence National Historical Park, and the many streets, houses and taverns that served as the sites for revolutionary gatherings, making it a prime starting point for a day (or two) of discovery.

With the return of PoliticalFest for a 16th year, dozens of locations will be opening their doors during the convention. A number of Philadelphia’s best museums have planned educational programs for all ages, allowing visitors a chance to get up close and personal with the city’s rich history. Discover the National Liberty Museum’s exhibit on America’s First Families, with a display of White House china dating back to George Washington’s presidency. Stop by the National Constitution Center for an exhibition on the electoral process, plus trivia contests, panel discussions and more. Visit the Heritage Center at the Union League for a sweeping look back at the 11 political conventions Philadelphia hosted between 1848 and 2000. In an event that’s ideal for families or kids fascinated with all things presidential, the Pennsylvania Convention Center is presenting the Politics & You!, bringing interactive experiences like an Oval Office replica and a “Future Leaders Zone” to the event space. Be sure to find C-SPAN’s official Campaign 2016 Bus, which will be available for tours and host to even more interactive exhibits.

With so many convention events to choose from, this will be one of the most extraordinary times to visit Philadelphia in recent history. Take advantage of one of the biggest political events in recent memory, and stay at our Rittenhouse Square accommodations for your visit during the DNC.