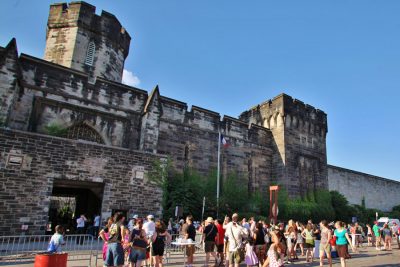 Storm The Bastille In Philly

Staying at our hotel in Philadelphia puts you in the middle of history. Celebrate the storming of the Bastille at Philadelphia’s own historic prison, The Eastern State Penitentiary. This old prison was once the most famous and expensive in the world. The grand architecture, empty guard towers, and crumbling cell-blocks give it a haunting atmosphere. Its vaulted, sky-lit cells once held America’s most notorious criminals, including Al Capone and “Slick Willie” Sutton. Today, it’s a museum housing artifacts, exhibits, and festivals, including this year’s Bastille Day festival on July 16th.

Events happen all afternoon. From 10am to 5pm, you can tour Eastern State Penitentiary, and from 2pm to 5:30pm, the French Family Carnival begins on Fairmount Avenue. There will be an inflatable obstacle course, a Tastykake eating contest, water balloon toss, Jumbo Jenga, face painting, and arts & crafts. Game winners get tickets for prizes. At 5:30, the grand finale begins with cabaret performances from The Bearded Ladies, an experiment cabaret troupe, culminating in the storming of “the Bastille” (Eastern State Penitentiary). The completely historically accurate reenactment of the storming of the Bastille will be emceed by “The Voice of Paris,” Edith Piaf, and feature appearances by other historic French figures, like Napoleon, Joan of Arc, Benjamin Franklin, and even a six-foot French Baguette. The revolutionaries will capture Marie Antoinette (played by Terry McNally, co-owner of The London Grill and Paris Wine Bar) and 2,000 Tastykakes will be flung from the prison’s towers. Afterward, you can dine on French-themed food and drink specials at local Fairmount restaurants.

Dress up for the festival with your own French Revolution-era costume. Storm the Bastille as a peasant, and dress in rags in wool and linen. Add in a red cap or the rebel colors of rouge, blanc, et blue – red, white, and blue – with ribbon rosettes or sashes to show your revolutionary spirit. If you want to live the life of luxury, dress as one of the aristocrats. Men wore side curls and a ponytail with a black bow, while women piled, frizzed, and curled their hair into fantastic coiffures. Ladies also wore petticoats, gowns, and those iconic cone-shaped dresses.

Celebrate a different kind of Independence Day during your visit to The Rittenhouse. Our luxury Philadelphia hotel’s central location in downtown puts you within easy access to The Eastern State Penitentiary and the many other historic attractions in Philadelphia. On this year’s Bastille Day, experience all things French with Liberté, Egalité, and Fraternité.